> All Blog News>New finds in 2017 at the Poudrette Quarry, Mont-Saint-Hilaire, Quebec Province, Canada 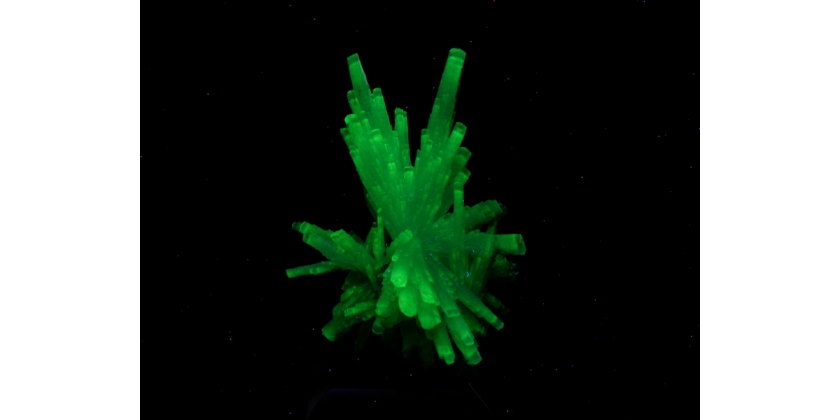 In 2017, several new mineral cavities and/or fractures were opened at the Poudrette Quarry, Mont-Saint-Hilaire. The specimens were discovered during numerous private visits at the quarry.  In 2020, Collection Arkane purchased these specimens to make them available to the collector community.

The specimens were found in separate small cavities and/or fractures in the walls of the quarry. The quarry at Mont-Saint-Hilaire is one the most prolific localities in the World with currently 430 approved mineral species identified of which 69 are type locality minerals (ref. mindat.org). See our previous blogs about this locality.

The cavities content may be divided into four discoveries: fluorite and rhodochrosite; analcime, serandite, rhodochrosite, aegirine, kupletskite, natrolite and/or other species; lemoynite and/or natrolemoynite; and natrolite.

The fluorite and rhodochrosite specimens are mostly non-descript aggregates of very small crystals of highly fluorescent green fluorite associated with pink rhodochrosite. Uncommonly, purple fluorite crystals may also be associated with green fluorite. Sometimes, these two species are associated with small polylithionite crystals. Other unidentified minerals may also be present at the microscopic level.  A very limited number of these specimens were also associated with quartz crystals that surprisingly display green fluorescence from their most gemmy sections.  These quartz are most often naturally etched, show at least  2 to 3 layers of phantoms with the inner layer being most often smoky.  On some specimens, the outer layer of the quartz crystals is heavily etched and gemmy to opaque and non fluorescent, and very small fluorite crystals are embedded within the quartz.  Other mineral species may also be embedded within these quartz.

Another group of small cavities provided a large mixture of white opaque analcime, pale to dark serandite, rhodochrosite, aegirine, kupletskite, natrolite and/or other species. These species occur associated or just by themselves in the cavities.

A cavity of altered pegmatite was found with lemoynite and/or natrolemoynite sprays hiding in matrix crevices and on matrix spikes. As reported by Horvath & all, both species are visibly identical and may be reliably distinguished only by quantitative chemical analysis. Natrolemoynite is reported to be more common.

Highly fluorescent aggregates of acicular prismatic natrolite crystals have been found in one or more cavities. The delicate natrolite crystals are opaque at the base and become translucent with sometimes but rarely gemmy points. The crystals may reach several centimeters in size and display strong green fluorescence under short wavelength ultraviolet light.

Collectors who wish to further investigate the geology and mineralogy of the Poudrette Quarry at Mont-Saint-Hilaire and find excellent photographs of mineral species from this locality are invited to consult the mindat.org website as well as the Mineralogical Record special publication on Mont-Saint-Hilaire (volume 21, number 4, 1990). Also, you may wish to consult Gilles Haineault’s book about some specimens of his personal collection, and the Mineralogical Association of Canada Special Publication number 14, certainly the most comprehensive publication about the history, geology and mineralogy of this locality.