> All Blog News>Dioptase: an emerald-green to blue-green gemmy mineral species 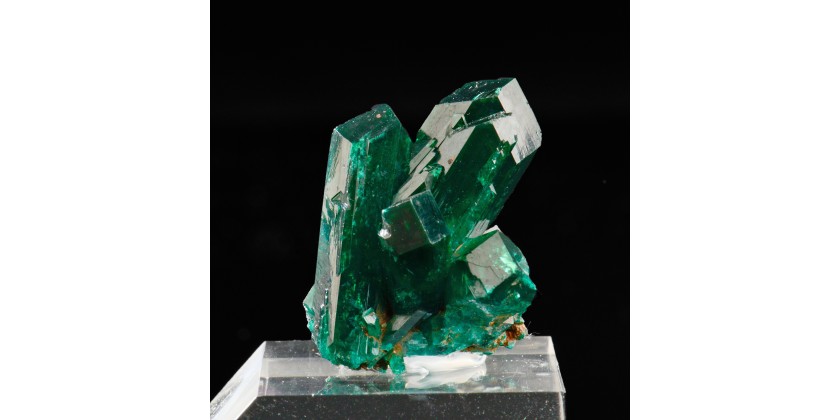 The mineral species Dioptase is a trigonal cyclosilicate, CuSiO3 · H2O. Cyclosilicates belong to the larger class of silicate minerals. Dioptase name is derived from Greek for "through" and "to see" in allusion to the visibility of internal cleavage planes.

There are only 26 known silicate mineral species which contain Copper. But only two other minerals besides Dioptase contain solely Copper, namely Gilalite and Shattuckite. All other species display more complex composition.

Dioptase name is derived from Greek for "through" and "to see" in allusion to the visibility of internal cleavage planes. Dioptase is mostly a secondary mineral typically found in oxidized zones of Copper deposits. Most often crystals do not exceed 0.75 cm in size. It is a favorite among mineral collectors because of its translucent to gemmy crystals, their sharpness and rich deep green colour.

As reported on mindat.org, there are 136 known localities worldwide where Dioptase has been identified. But there are not many localities to find great Dioptase specimens for their crystal size, perfection and gemminess. Currently, great specimens of interest to collectors have come out of its type locality in Kazakhstan (Altyn-Tyube, Karagandy Province), and from Tsumeb area in Namibia where crystals up to 5 cm in size have been found.

Collectors who wish to investigate further the geology and mineralogy of Dioptase and find excellent photographs of this colourful mineral species are invited to consult the mindat.org website as well as the Mineralogical Record publications (especially volume 8, number 3, 1977).